What is a Stroke 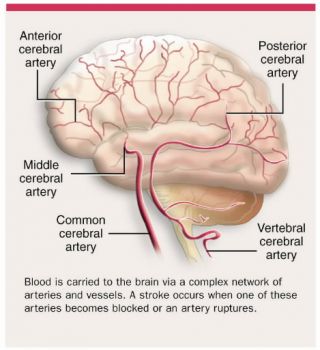 A stroke is a condition where a blood clot or ruptured artery or blood vessel interrupts blood flow to an area of the brain. A stroke isalso known as a cerebrovascular accident (CVA). A lack of Oxygen and Glucose (Sugar) flows to the brain leads to the death of brain cells and brain damage, often resulting in impairment in speech, movement, and memory. Strokes happen when blood flow to your brain stops. Within minutes, brain cells begin to die. There are two kinds of stroke. The more common kind, called Ischemic Stroke, is caused by a Blood Clot that blocks or plugs a blood vessel in the brain. Ischemic stroke accounts for about 75% of all strokes and occurs when a blood clot, or thrombus, forms that blocks blood flow to part of the brain. The other kind, called Hemorrhagic Stroke is caused by a blood vessel that breaks and bleeds into the brain. “Mini-strokes” or transient ischemic attacks (TIAs) occur when the blood supply to the brain is briefly interrupted. The outcome after a stroke depends on where the stroke occurs and how much of the brain is affected. Smaller strokes may result in minor problems, such as weakness in an arm or leg. Larger strokes may lead to paralysis or death. Many stroke patients are left with weakness on one side of the body, difficulty speaking, incontinence, and bladder problems.

Ischemic strokes are ultimately caused by a thrombus or embolus that blocks blood flow to the brain. Blood clots (thrombus clots) usually occur in areas of the arteries that have been damaged by atherosclerosis from a buildup of plaques. Embolus type blood clots are often caused by Atrial Fibrillation – an irregular pattern of heart beat that leads to blood clot formation and poor blood flow.

Stroke is diagnosed through several most often without contrast enhancements) or MRI scans, Doppler ultrasound, and arteriography. The diagnosis of stroke itself is clinical, with assistance from the imaging techniques. Imaging techniques also assist in determining the subtypes and cause of stroke.

The primary goal in treating ischemic stroke is to restore blood flow to the brain. This will be attempted using blood clot-busting drugs such as aspirin, heparin, or tissue plasminogen activators that must be administered within three hours of the stroke. In addition, surgical procedures may be performed that can open up or widen arteries. These include carotid Endarterectomy (removal of plaque and widening of the carotid artery) and Angioplasty (a balloon that widens the cartoid artery and is held open with a metallic mesh tube called a stent). A study found that cholesterol lowering drugs can prevent stroke recurrence.
Hemorrhagic stroke is treated differently than ischmic stroke. Surgical methods used to treat this stroke variant include aneurysm clipping, aneurysm embolisation, and arteriovenous malformation (AVM) removal. Aneurysm clipping consists of a small clamp placed at the base of the aneurysm that isolates it from the circulation of it is attached artery and keeps the aneurysm from bursting or re-bleeding. Aneurysm embolisation (coiling) uses a catheter inserted into the aneurysm to deposit a tiny coil that coil fills the aneurysm, causing clotting and sealing off the aneurysm off from arteries. AVM removal is a surgical procedure to remove usually smaller AVMs or AMVs that are in more accessible portion of the brain in order to eliminate the risk of rupture.

3 thoughts on “Stroke – Can change your life style for ever”