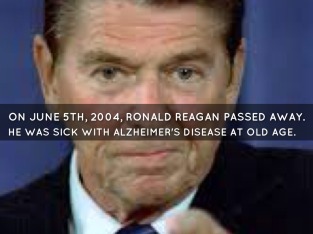 Public awareness of AD increased significantly when Ronald Reagan (1911–2004), the 40th president of the United States (1981–1989), was diagnosed with the disease in 1994. He died from complications of AD at the age of 93. Alzheimer’s disease (AD) is the most common form of dementia in those aged 65 and older. It is an irreversible and incurable progressive neurological disease caused by the degeneration and eventual death of a large number of neurons (nerve cells) in several areas of the brain, accompanied by diminished brain size. AD usually occurs in old age and begins with short-term memory loss. This is followed by the slow progressive loss of memory and cognitive and intellectual functions, leading to the deterioration of physical functioning and incapacitation. Alzheimer’s rarely occurs before the age of 60. Early-onset AD, affecting people in their 30s, 40s, and 50s, accounts for only about 5% of total cases.

The most significant risk factor for Alzheimer’s disease is advancing age. The risk of developing AD begins to rise after age 65 and rises sharply after age 75. There are various other possible risk factors:-

It is most likely caused by a combination of genetic and environmental factors. Viral, immunological, and/or biochemical etiologies have also been proposed. Genetics almost certainly plays a role, even in sporadic AD. Brain inflammation and restriction of blood flow to the brain may play a role in the development of beta-amyloid plaques and neurofibrillary tangles. Highly reactive molecules called free radicals damage all types of cells through oxidative processes, especially brain cells, which have lower levels of protective antioxidants.

AD symptoms can be grouped into three categories:

Although there is no cure for Alzheimer’s disease, early diagnosis and prompt intervention can slow its progression and enable patients to function independently for a longer period. Health care professionals usually assess a patient’s ADL to determine what type of care is needed. The mainstay of treatment is the establishment of daily routines, good nursing care and/or home-care strategies, and providing physical and emotional support. In the initial stages, counseling by a psychologist or an AD support group is recommended.